My Research – “The War for Talent – the British Army’s Strategy”

‘It is manpower that must provide the military’s decisive edge as western technological and equipment superiority can no longer be guaranteed.’

The Army must identify and nurture its future generals from its officer cadets as it cannot buy talent from elsewhere to fill shortfalls in its middle and senior ranks. It must retain the officer from the outset of their career all the way through what could be 35 years Service.  However, neither the psychological contract nor the remuneration which originally attracted a potential officer are likely to remain constant throughout their career as they progress through the ranks in completely different jobs from that which initially attracted them.

Recruitment and the Psychological Contract.

The purpose of recruiting is to attract and select the right person, for the right place, at the right time. However, the talent pool is challenging especially in an improving and dynamic economy, where its competitor’s offers cannot be matched financially. While the Army aspires to be a pre-eminent graduate employer, it is falling down the graduate recruitment league table; and in light of increasing university fees, the number of non-graduate officer recruits is on the increase. In comparison to civilian jobs where once selected, remuneration is agreed and formal contracts are signed, there is no Army contract.  It is suggested that the officer makes a ‘psychological contract’ with the Army on commissioning.  This ‘contract’ is based on the remuneration at the time and the Recruiter’s ‘offer’ which is focussed on the officer’s first employment at Regimental Duty in Career Stage 1, rather than the jobs at Staff where the officer will spend the majority of their time as a middle-to-senior ranking officer in Career Stages 2 and 3.

Like any organisation, the Army’s challenge is to attrit those that do not meet its needs, while ensuring it can retain those individuals who do.  However, the challenge is to attract and select a future Chief of the General Staff (the head of the Army) as a young officer and retain them so that the right person is there at the right time some 35 years later.  The demands placed by the Government on the Army in relation to its tasks and budget will change and these will impact both the original psychological contract and remuneration package that initially attracted the officer. Significantly, the officer’s own aspirations and personal circumstances (eg: through marriage, having children, etc…) will also change and may significantly impact on their retention.

The PhD research will consider the British Army’s strategy for attracting, selecting and retaining its talent ensuring that those the Army wants are retained throughout their careers. 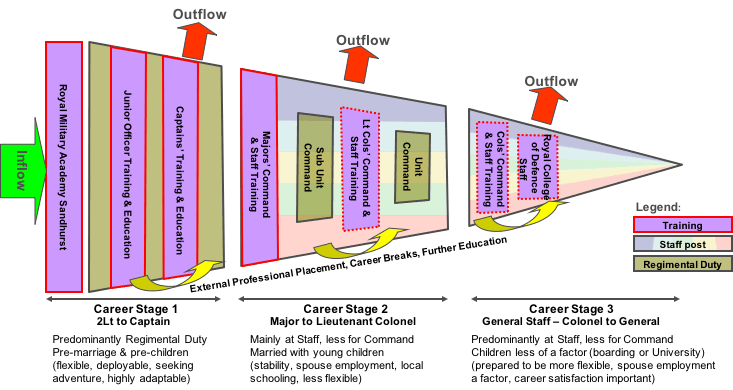